On Saturday, my mom came over for a full day of painting and decorating. (First things first: thank you for all of your help, Mom!!)

In between coats of paint in the bathroom—I'll tell you about that later—she gave me a primer on outdoor decorating for the holidays. First, we wanted to replace the summer windowbox arrangement that the previous owners had designed with a festive winter windowbox. She also pitched the idea of setting up some little pots for the front step, which I liked.

Mom tackled the windowbox while I slowly started poking pine boughs into one of the pots. She used drapey pine boughs (they smell wonderful!) with artificial red berries, and she reused the summer arrangement's sticks. (I think she arranged the whole windowbox in the time that I worked on one pot.) In the pots, we stuck a different kind of pine bough vertically (very precise language here, I know) and then added more drapey boughs, pine cones, and red berries. The weather was good for working outside: temperatures were near 30, and the sunshine was surprisingly warm. 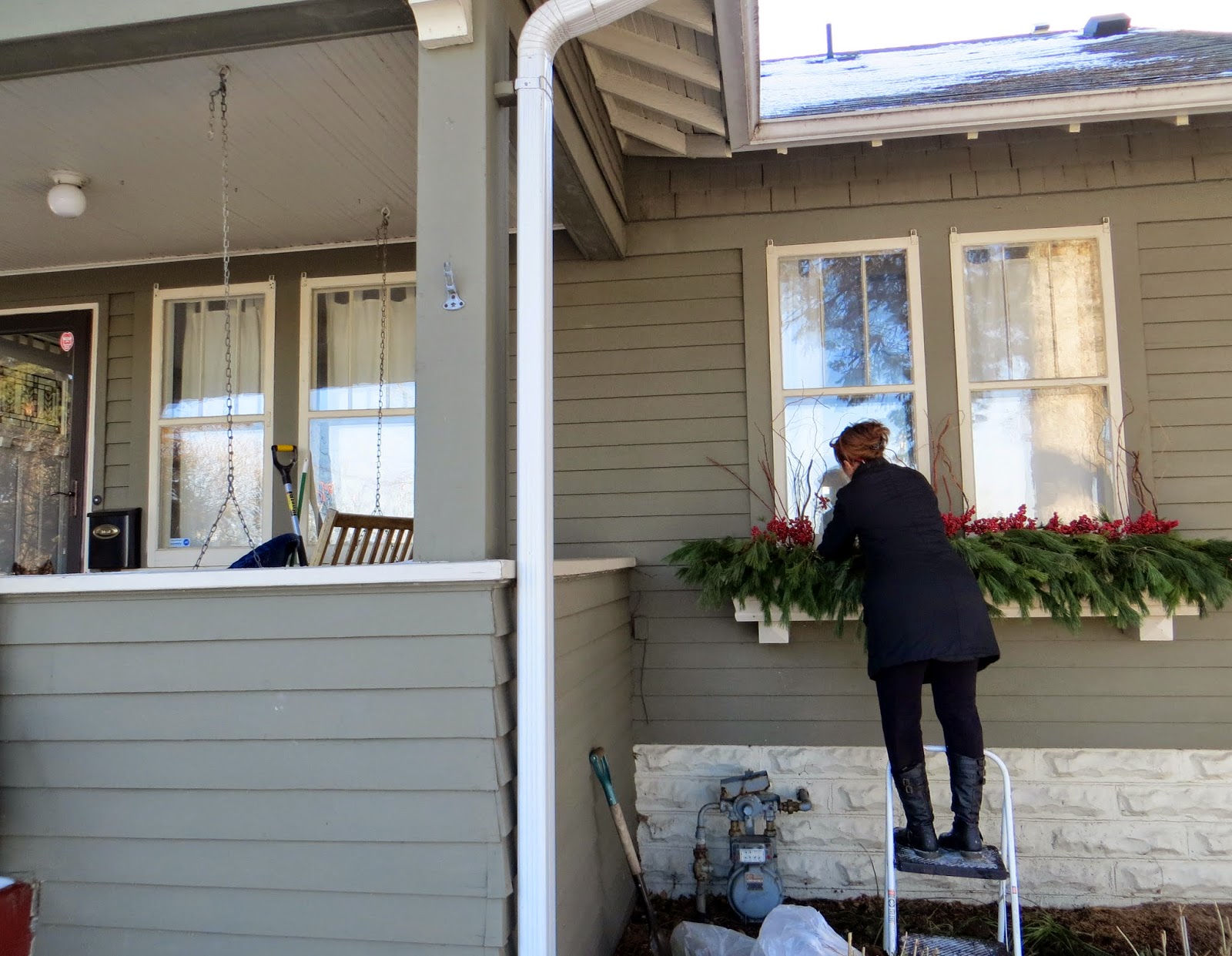 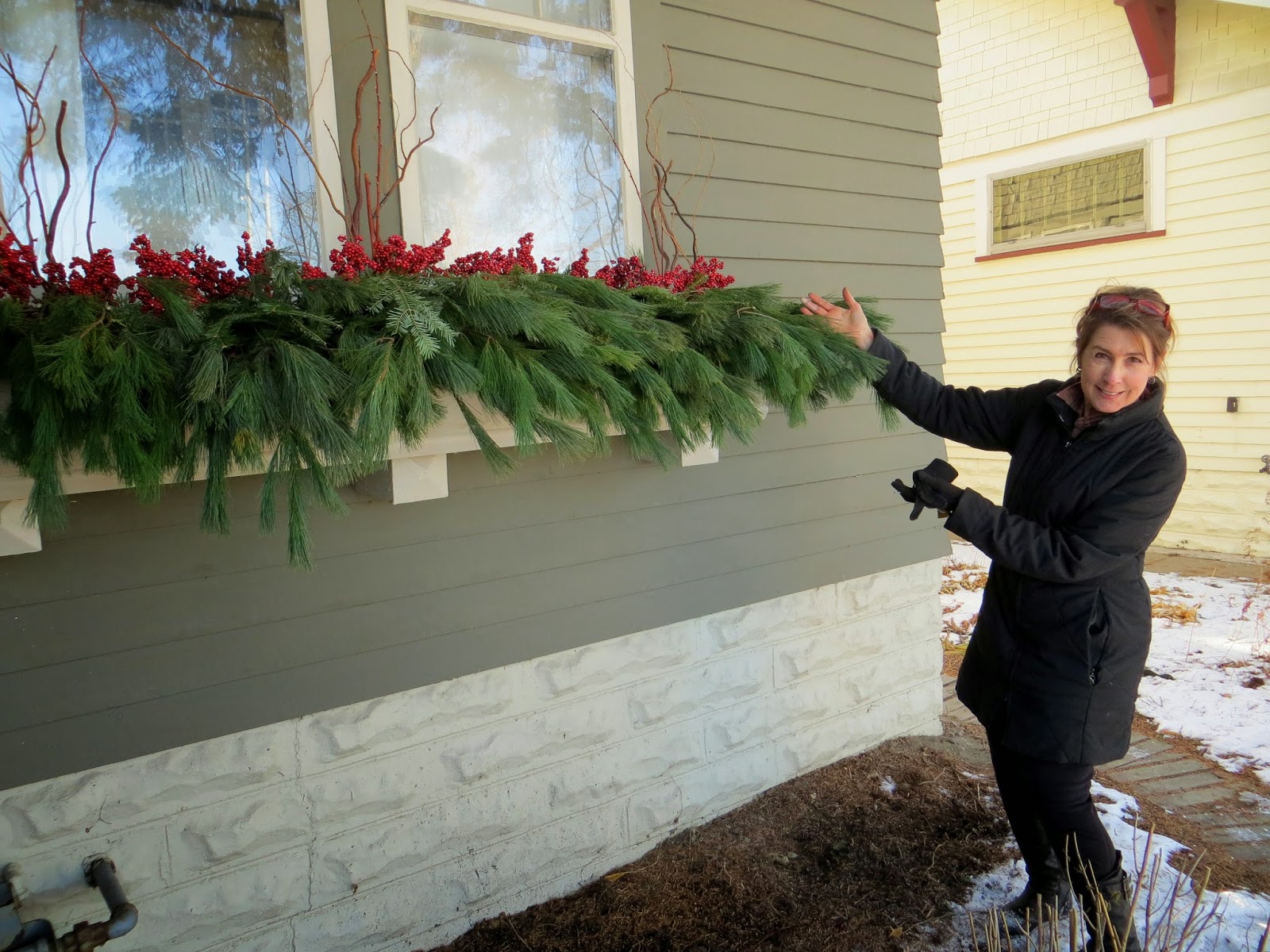 One more view of the windowbox: 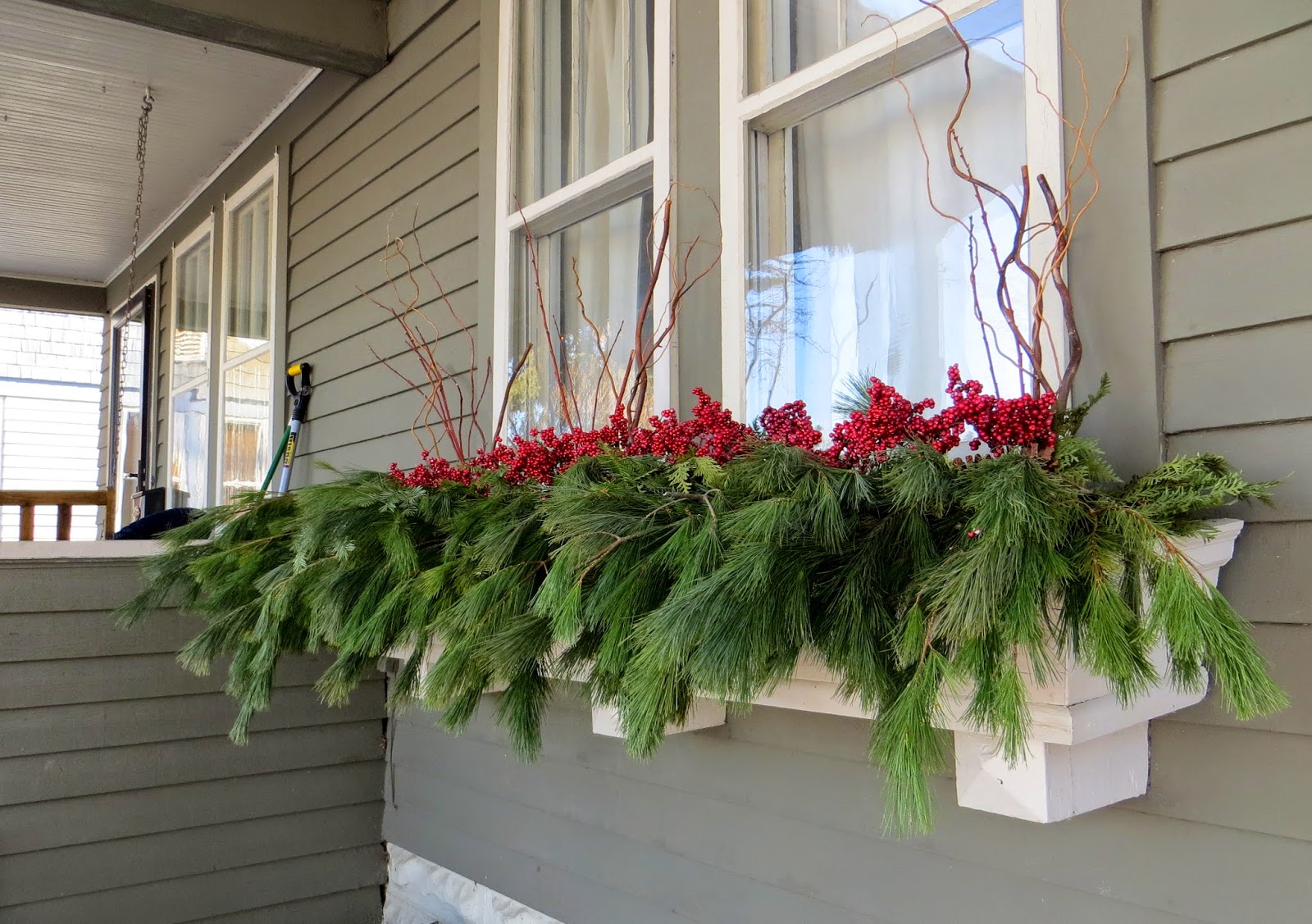 And me with the little pots! 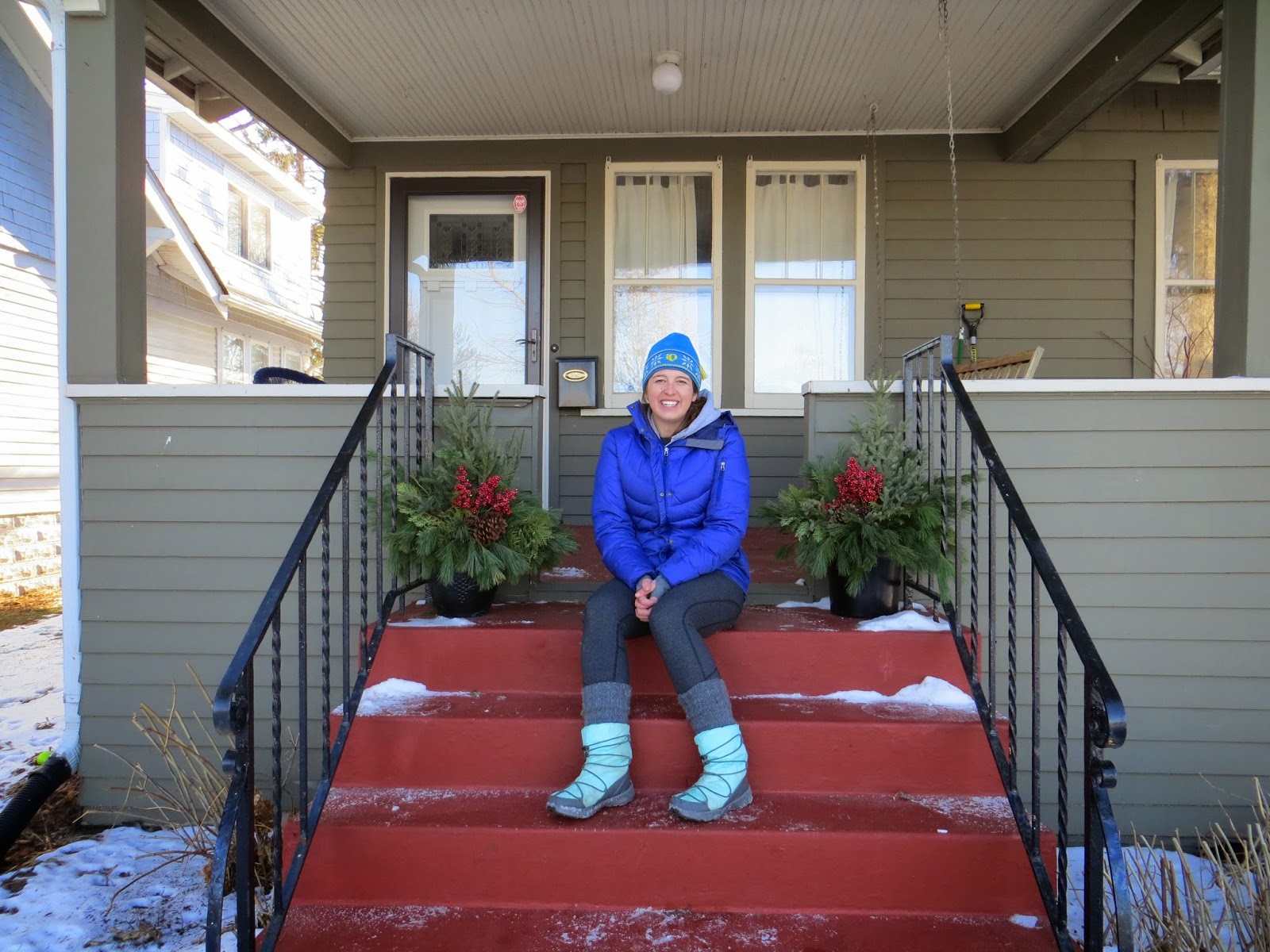 At the start of the morning, I had no idea how to even articulate what kinds of arrangements I liked best. Mom was so helpful in walking me through the steps, patiently advising me, and presenting different options. I like this new touch of cheer.
No comments:

It is tricky to capture in words how much I love Colorado sunsets, especially in the parts of the state with wide, wide open spaces. Last week, I got to see a true gem. 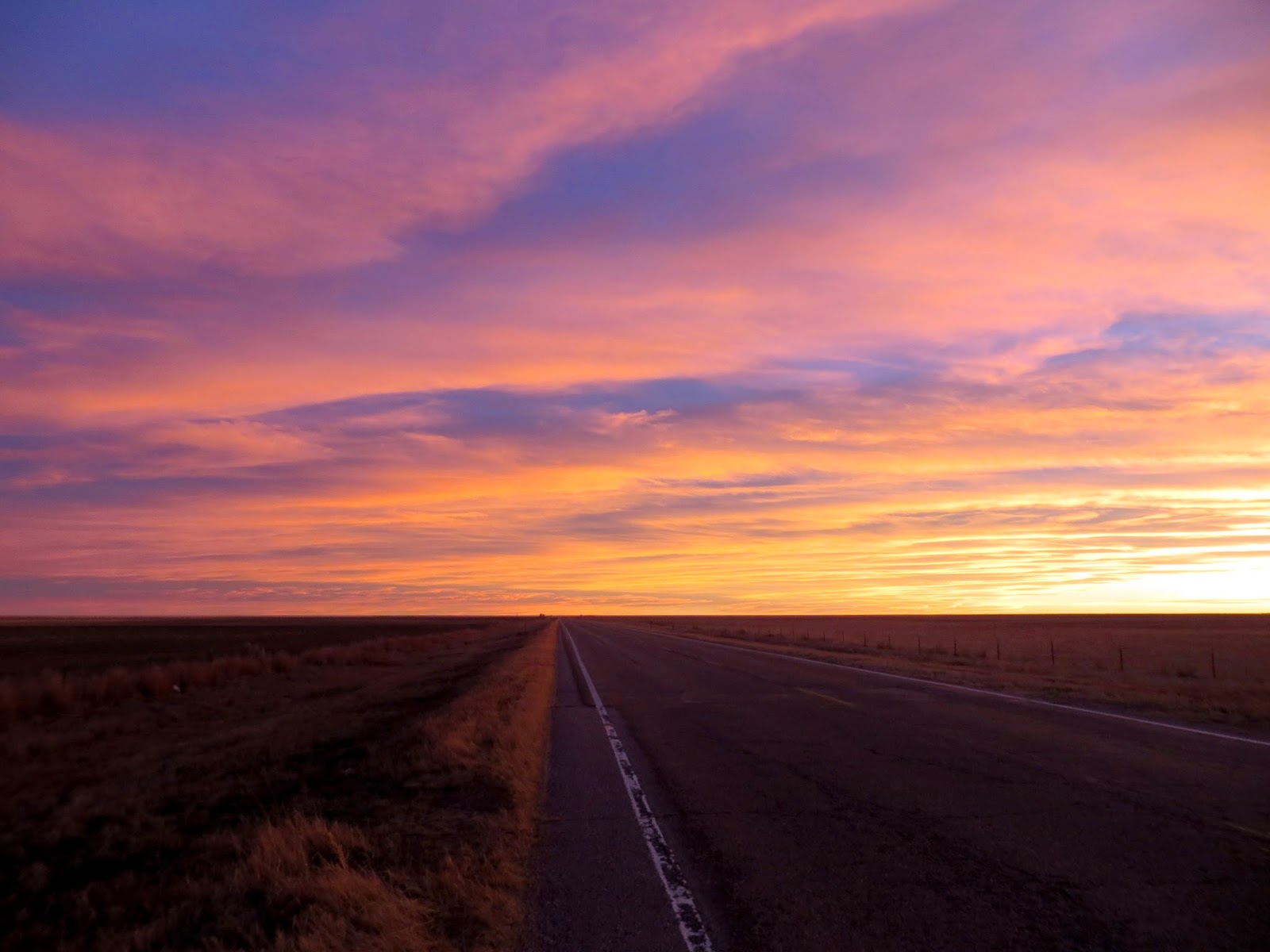 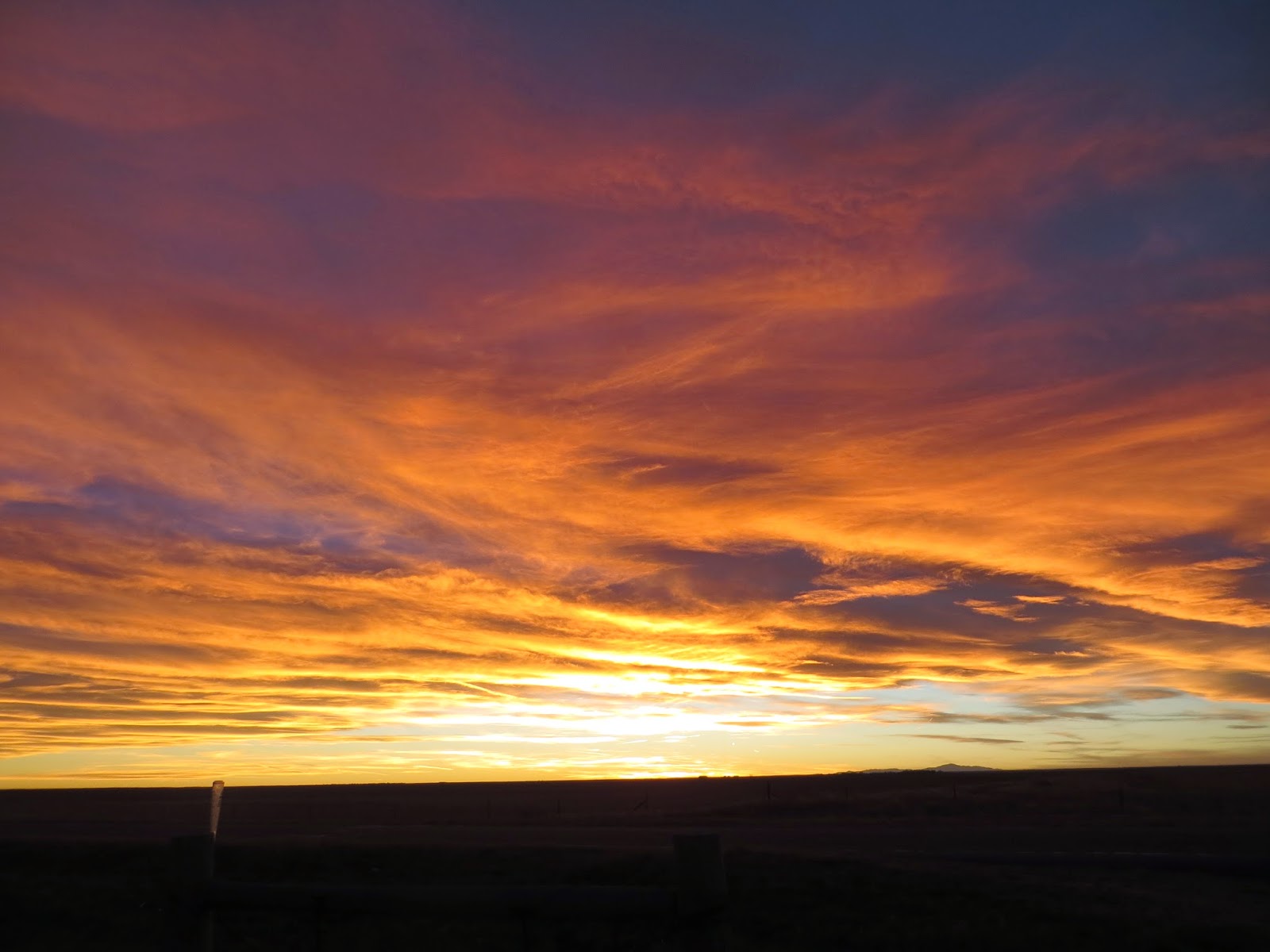 And the view to the north (perhaps my favorite because of the red-gold light on the fields): 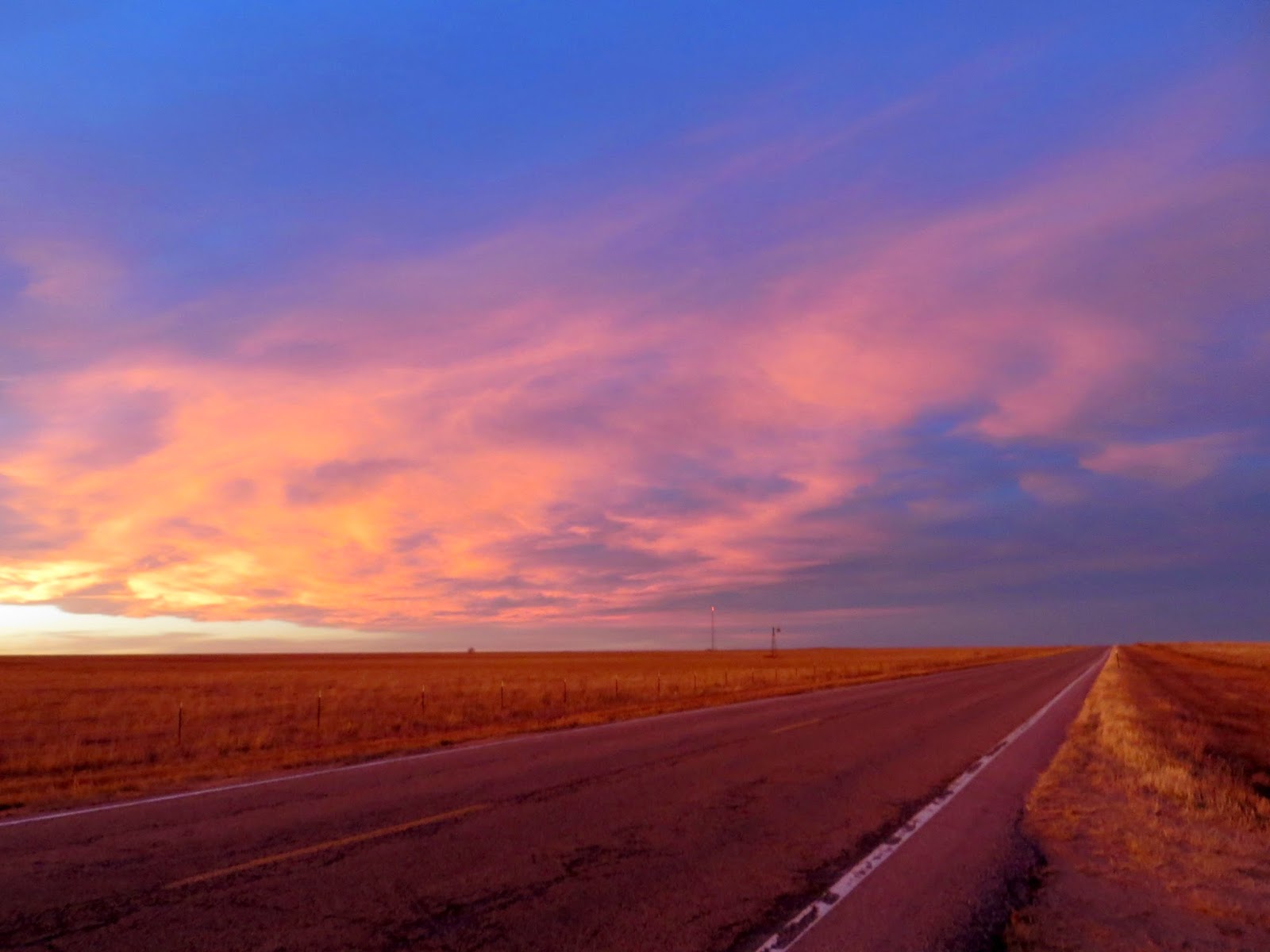 I couldn't believe it. What an amazing sight.
No comments:

A visit to Colorado

We are back in Minnesota after a week with our Colorado family!

It was special to spend Thanksgiving in Colorado because we are especially grateful this year for Josh's mom's health: she is in remission now after several months of challenging treatments. We stayed with Josh's brother and sister-in-law, took our niece and nephew to the park for some batting practice, caught a showing of Big Hero 6, enjoyed the 70-degree weather on Thursday and Friday, and visited with lots of family all week. 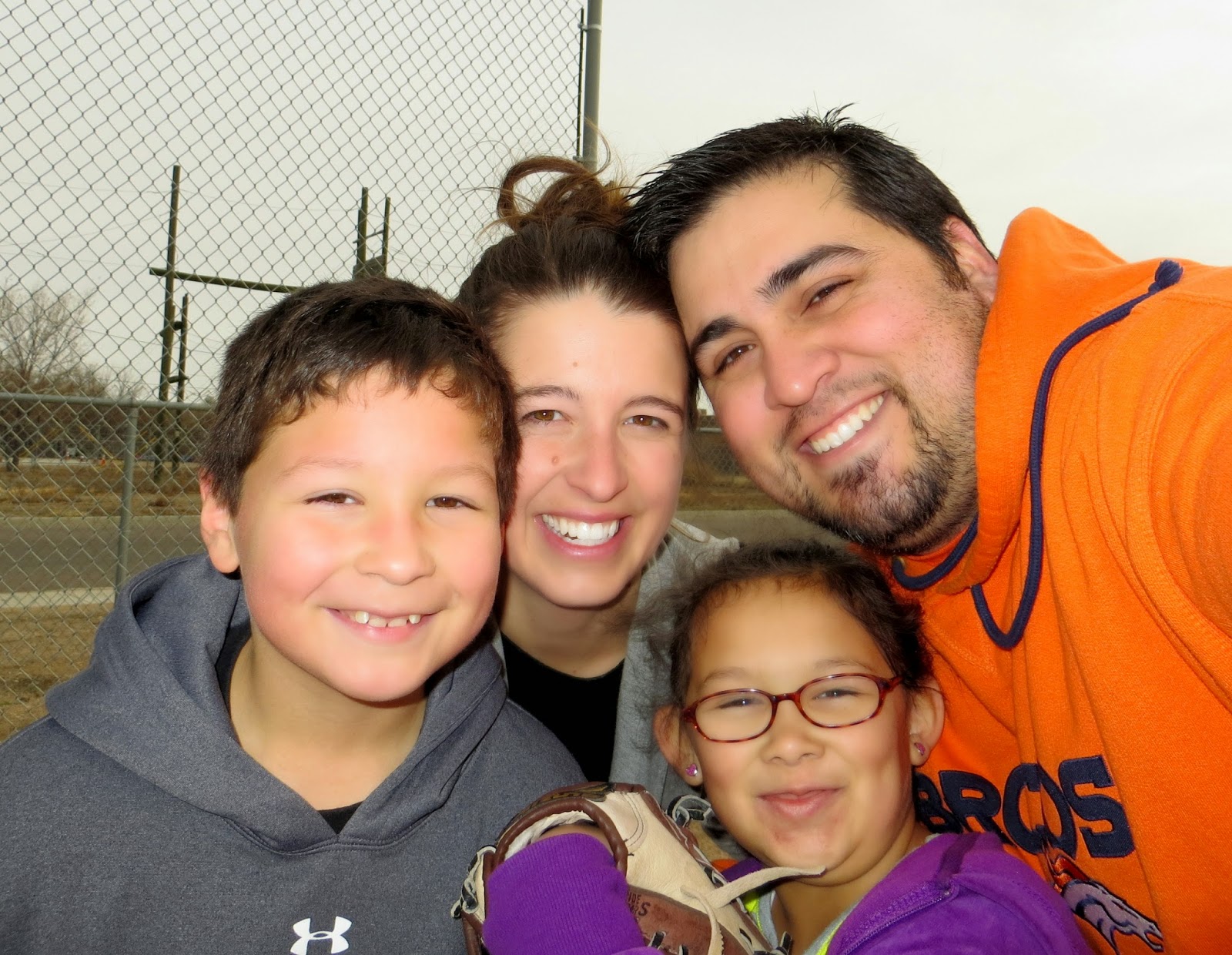 Now we're settling back into our routine at home. Other notes to begin the new week:

1) A huge thank you to my sister and her boyfriend, as well as my mom and dad, for taking such good care of Wish while we were away.

2) On the flight out to Denver, I got drawn into Rainbow Rowell's debut novel Attachments, which I chose because of how much I liked Eleanor & Park. (Next up: the rest of her books.)

3) Josh and I visited Menards yesterday and left with a Christmas tree, some garland, and a couple of window insulation kits. By the end of the evening, our fireplace mantel was adorned with the garland and some white lights, the tree was up but not decorated, and (thanks to Josh) a bunch of our windows were insulated with plastic.

4) There were some very exciting football games this weekend. The University of Tennessee won its sixth game of the season, becoming bowl-eligible for the first time since 2010 (and the first time since I started following the team)! That means that the team's season is extended for another month, until its bowl game.

5) Lasagna soup is in this week's menu plan for the first time this season.
1 comment:

Ice on the river

On this morning's run, I meandered along the Mississippi River, and I couldn't help taking a detour over the river to see what the water looked like.

The early cold snap ended overnight - the temperature was in the mid-30s by 8 a.m. and I liked leaving my gloves at home! - but the stretch of unseasonably cool temperature meant that ice had already started to form on the river. On a gray morning with a touch of fog, I took a minute to marvel at the formations before continuing on my way. 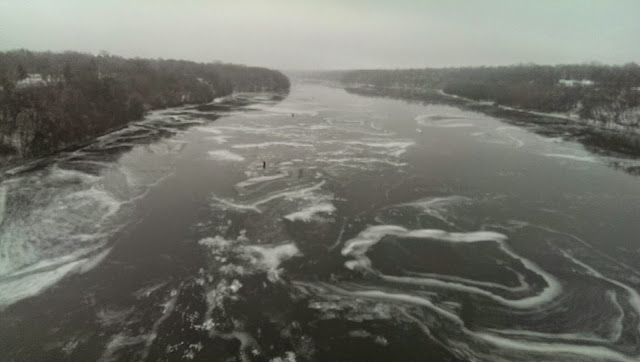 Email ThisBlogThis!Share to TwitterShare to FacebookShare to Pinterest
Labels: around town, river, running

The weekend started with a lowkey Friday evening during which Josh tested out Wish's habit of resting his chin on the coffee table to see if it was actually comfortable. (The answer is no.) 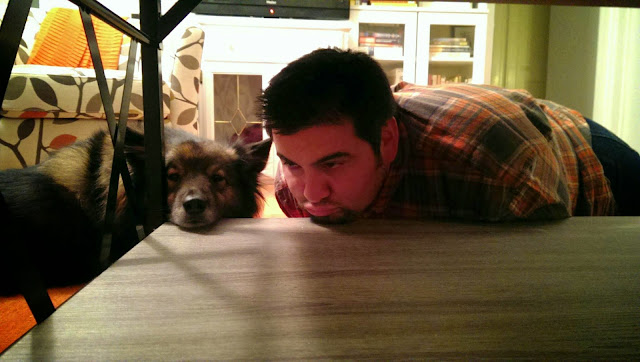 Then we had Gophers football tickets (we've been to three Gophers games total, and two were in the last two weeks!) and joined last week's tailgating group again for Deep Fryer Day before the 11:00 game. This meant deep-fried everything, including Oreos, which I'd never had in deep-fried form before. 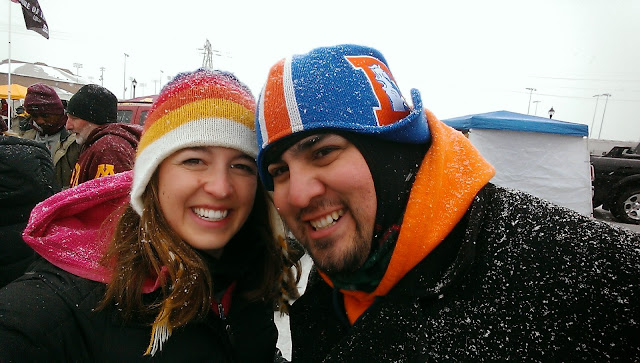 The rest of the weekend included more football, dinner with friends, and a visit to snap some photos of my friend's baby (a Santa hat did appear) before a family dinner on Sunday to celebrate my sister's boyfriend's birthday.

I've finished the fascinating book Upstairs at the White House: My Life with the First Ladies and am reading Caitlin Moran's How to Build a Girl for this week's book club, with Rainbow Rowell's Attachments waiting on deck. (We also starting listening to Serial over the weekend.) Moosewood vegetarian chili is on tap for later this week - it was supposed to be tonight, but I forgot we were out of bulgur. A new week is underway.
No comments:

Email ThisBlogThis!Share to TwitterShare to FacebookShare to Pinterest
Labels: family, football, friends, Rocky Top, weekend, Wish
Older Posts Home
Subscribe to: Posts (Atom)
About Me
I write and run in St. Paul, Minnesota. I get a kick out of life's small details and quirks.
milesandlaurel@gmail.com 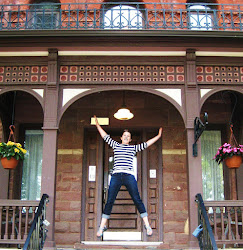